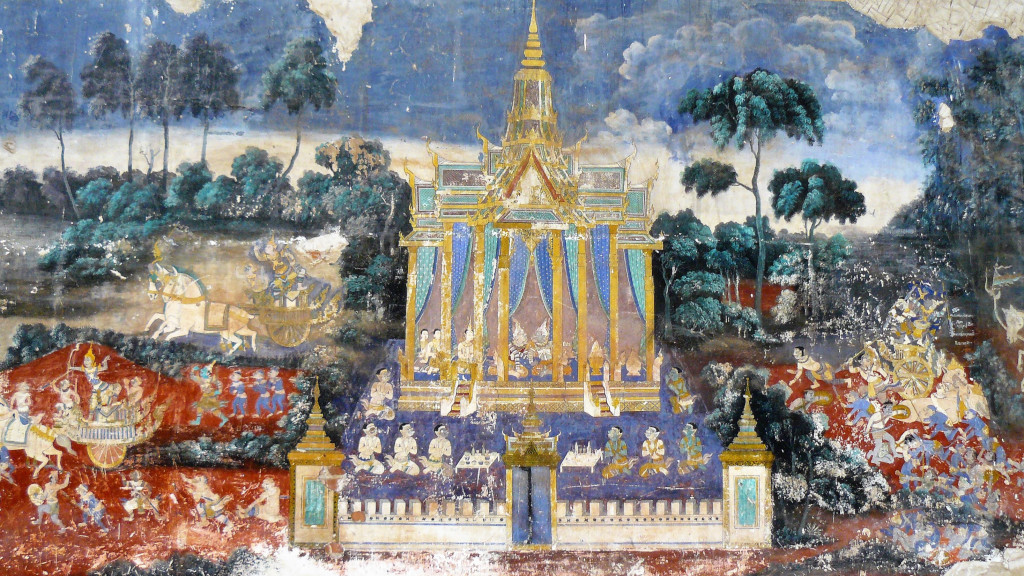 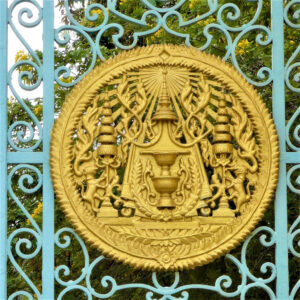 For a city that was known as the ‘Paris of the East’ before the 1970s, chances are you will have a hard time finding anything in Phnom Penh that reminds you of France.

Yes, there are a quite a few French colonial buildings. However, either they are badly maintained, or are rapidly being redeveloped to make way for high-rise buildings, malls and bigger structures.

Agreed, Phnom Penh may not have what either Siem Reap or Sihanoukville has to offer. What it does have though, is a reminder of Cambodia’s turbulent history, especially that of the latter part of the 1970s. A visit to both Tuol Sleng Genocide Museum and Choeung Ek can be an extremely disturbing and distressing trip.

However, there is more to the Cambodian capital. For those of you willing to give the city two full days, there is quite a bit to see and experience. It has its own charm and can be a very relaxed place.

Flying into Phnom Penh from around the region is simple as it is well connected to most international destinations. You can read more on their visa regime here. 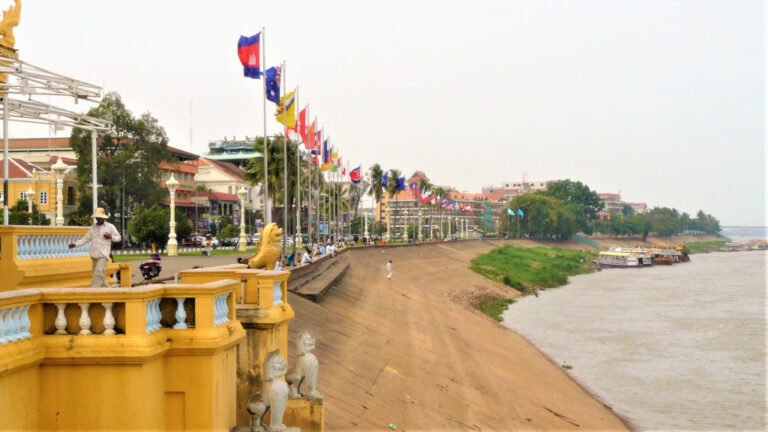 Between 1976 and 1979, when the Khmer Rouge overran Phnom Penh, they took over Chao Ponhea Yat High School and renamed it as S-21, or Security Prison 21. They immediately set about converting it into a prison that would hold an estimated 20,000 inmates, including men, women, children and infants.

The adults and children were photographed and then interrogated and tortured until they ‘confessed’. Though that number is disputable, it is worthwhile to say that there are only twelve accounted former prisoners who survived. As for the rest, once their interrogators had done with them, they were sent to Choeung Ek, the most famous of the killing fields, to be finally executed. Today, Tuol Sleng Genocide Museum serves as a memorial for the thousands of victims who passed through its door, never to see freedom again. It is a sad chapter in Cambodia’s history.

You can read more about museum here. 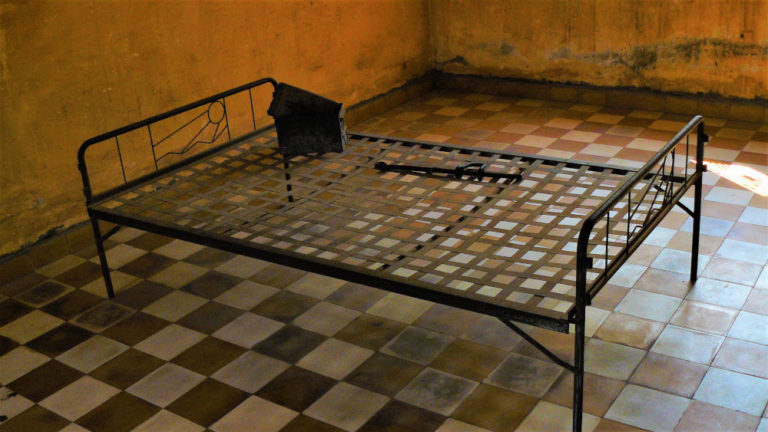 From here, make your way to the Killing Fields. While they comprise several sites across Cambodia, the best know of them is about 17 odd kilometers outside of Phnom Penh – Choeung Ek.

The monument is a homage to those who lost their lives to a useless cause, and the very few who survived. It is also a reminder of what transpired on these grounds for close to four bloody years. Estimates vary, but it is thought that more than 17,000 men, women and children made their one-way journey trucks over those years, to be summarily executed. 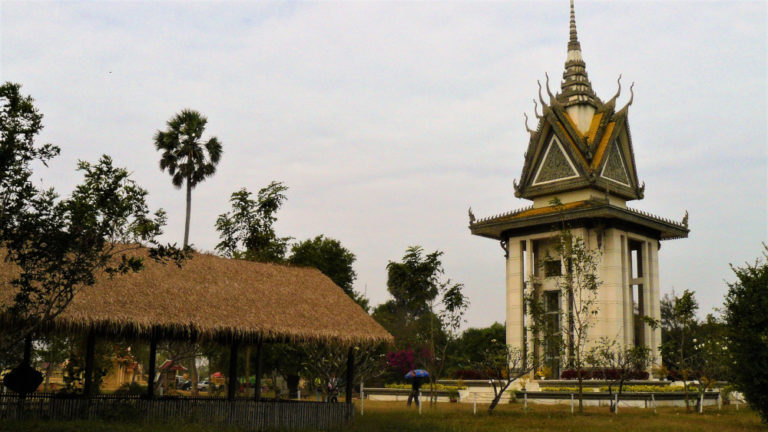 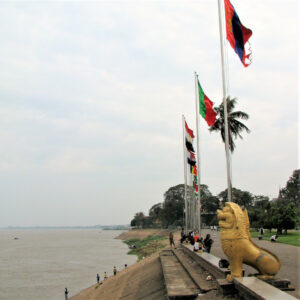 Now that you are done with a visit to these two sites, why not head back to the city and take it easy. Perhaps an early dinner on the Mekong as you watch the sun set may be just the tonic you need. Walk along Sisowath Quay, or the Riverside, and you will see lots of cruise boats parked on the shores. Most offer a cruise that is about 2.5 hours in duration and includes buffet dinner with live Khmer music. Costs start from US$ 15 upwards, per person. Some of them also include a hotel pick up, though you may need to make your arrangements to head back. 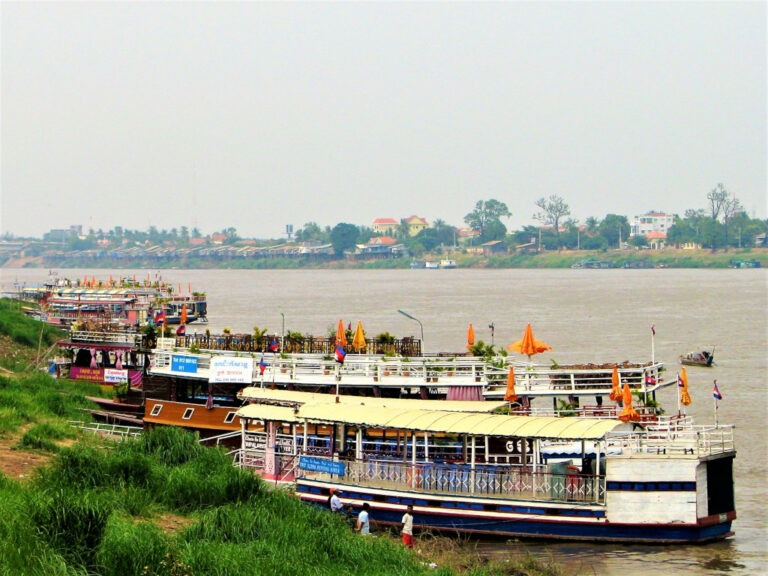 It is the official residence of the King and his Queen mother. Originally built in 1866, this site covering several acres of land within the city center, was chosen by King Narodom I on the advice of his astrologers and ministers. More than 100 years later, when the Khmer Rouge turned Phnom Penh into a ghost town, they surprisingly chose to leave the palace mostly intact.

The golden dome buildings within the walls of the palace ground make for a stunning piece of architecture. It is also home to the Silver Pagoda or the Pagoda of the Emerald Buddha, inlaid with more than 5,000 silver tiles.

For those interested in more details on what to see at The Royal Palace and Silver Pagoda compounds, you can read more here.

PS: For some strange reason, I can’t seem to locate photographs from the National Museum. What I’ve shown are photographs of the king’s coronation from an exhibit at the Royal Palace 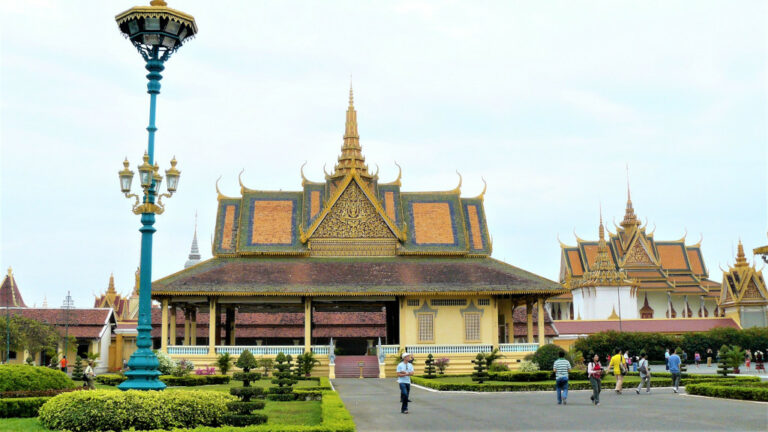 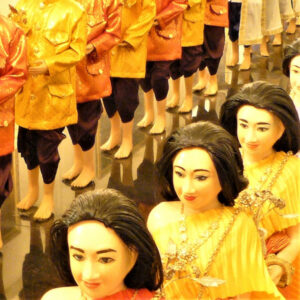 The museum was built between 1917 and 1924. For those with an interest in archeology, it houses more than 14,197 Khmer sculpture, ceramics and ethnographic objects dating back to pre-historic, pre-Angkor, Angkor and post-Angkor periods.

And should you get tired, then step out into the courtyard and get some rest on any of the benches in the central courtyard, or better still go by the many ponds and watch the fishes or admire the water lilies.

It is right next to the Royal Palace and is open daily from 8am to 5pm and entry is US$ 10 per foreign adult (US$ 5 for those under 18). Remember to dress appropriately as security can be strict about it and you could be denied entry.

PS: For some strange reason, am unable to locate photographs from my visit to the museum. Instead, I have taken the liberty to show a model exhibition of the coronation ceremony when visiting this city last. 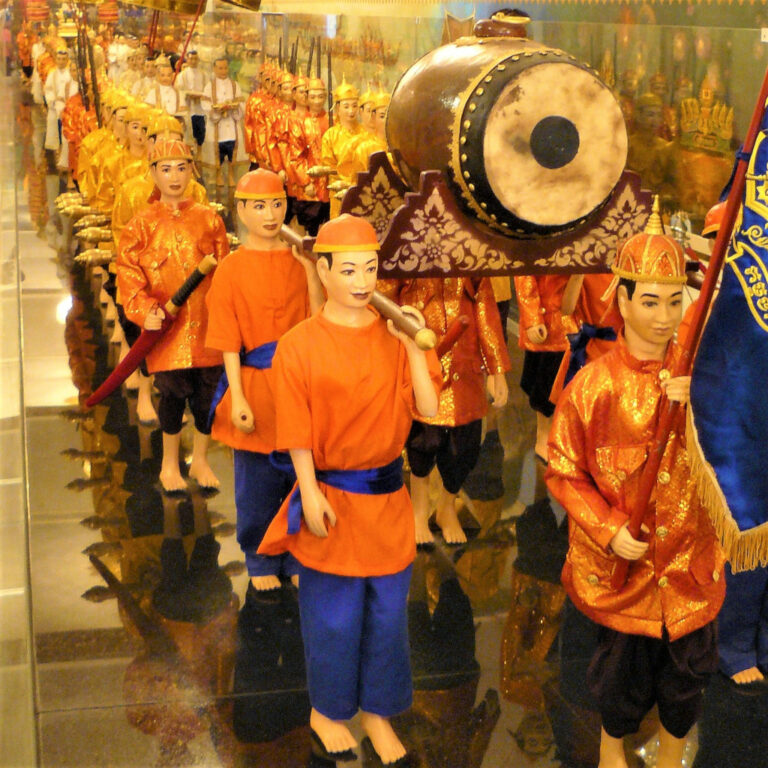 For a city that has seen so much strife, the Independence Monument has been left untouched since it was built in 1953. Taking its inspiration from the Khmer temples of Angkor Wat and shaped as a lotus stupa, it was officially inaugurated on the 9th of November 1962 to celebrate its independence from French colonial rule, which happened nine years ago. However, today, it also serves as a memorial for Cambodia’s war victims. On this day, every year, a ceremonial flame is lit to honour all those who lost their lives.

The monument is closed to the public. However, it is best viewed from the outer periphery of the roundabout.

It is about 10 minutes walking distance from the Royal Palace. 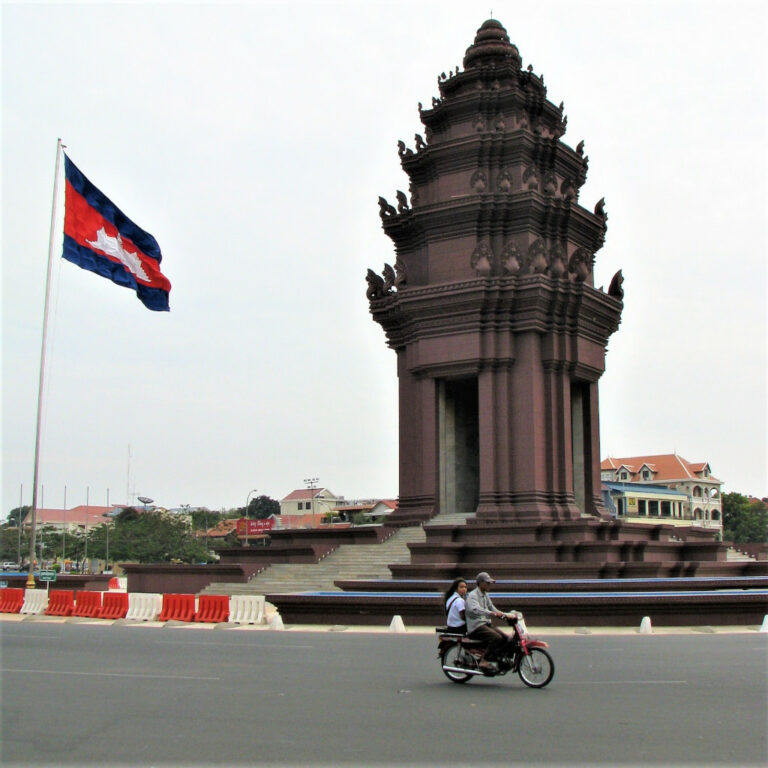 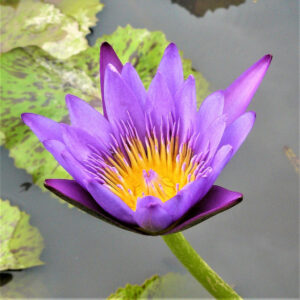 While I was unfortunate to miss out, Wat Phnom is also worth a visit. Again, it is quite close to all the places you will be visiting on day two, and time permitting, you should visit this place.

It literally means ‘Hill Temple’ and is the only hill in Phnom Penh. Legend has it that the first pagoda was built around 1373 by a wealthy widow named Penh. It’s said that she found four bronze statues of the Buddha in a tree by the river. She proceeded to construct a small shrine to protect the statues. Over time, the site became a sacred one where people would come to pray and seek blessings.

There is an entry fee of US$ 1 per person. Once inside, watch out for the monkeys. 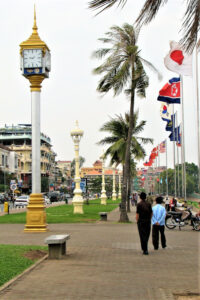 Also called Riverside, this is a well laid out boulevard along the banks of the Mekong and Tonle Sap rivers. Large open spaces with lawns, palm trees and an open path make this a pleasant place to hang around, especially in the evening. Giving it an international feel are flags of all the United Nation countries.

On the other side of the street are shops, cafés, restaurants and bars that are a popular meeting point for both Cambodians and tourists.

After two hectic days exploring all that Phnom Penh has to offer, this is a welcome end to your stay in the capital. Choose a spot you feel comfortable, order your favourite beverage, and then sit back and watch everyday street life. 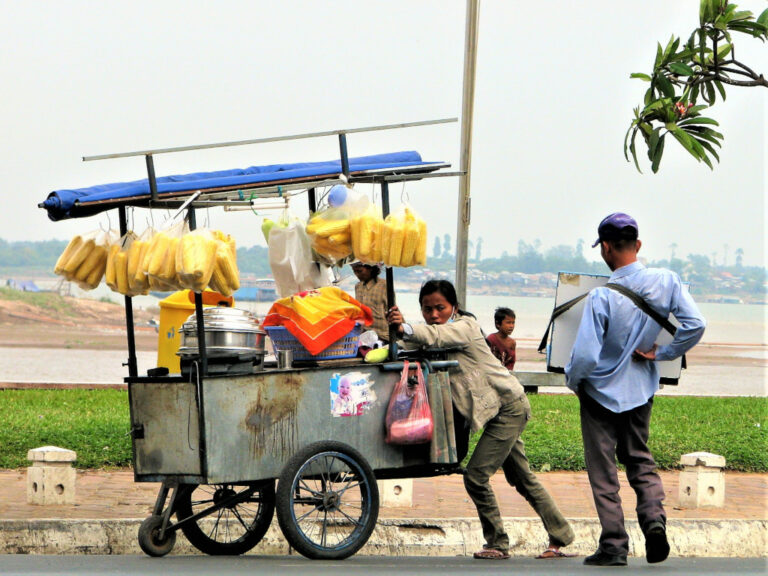 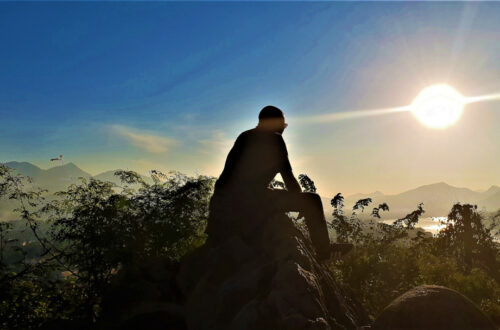 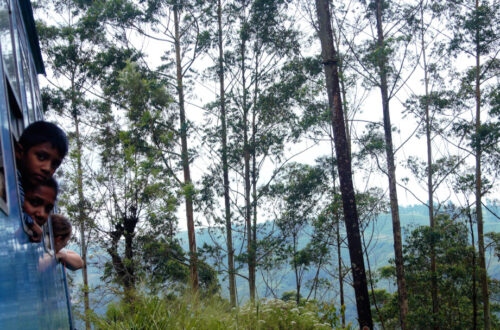 In praise of train travel